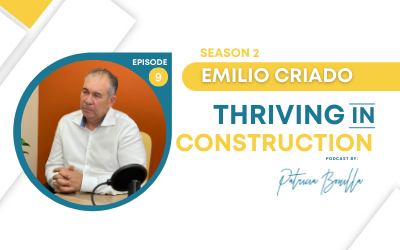 Season 2 | Episode 9
Women in the Construction Industry: Then and Now with Emilio Criado
Download Podcast Transcript
WHERE TO LISTEN

He started working as a laborer in the construction industry at the early age of 13. Though he wanted to be a marine biologist, fate and necessity pushed him to work in construction.

And that is Emilio Criado, Lunacon Construction Group’s Vice President. From being a laborer, he became a carpenter and eventually climbed up the ladder to become a foreman, assistant superintendent, and finally, superintendent.

However, things were not smooth along his journey. But with the twist of fate, a woman helped him change his role from laborer to a carpenter. And the rest is history.

Our next episode here in Thriving in Construction, The Podcast, is full of perspectives about the importance of women in the construction space. Emilio emphasized their significance and how men’s perceptions changed over the years. He also pointed out the very reason why there is such a high risk of danger working before in the construction.

“I saw that more and more women were getting into the business. And more and more women were qualified and had leadership roles, not only in business in construction but also in other businesses. I had noticed that more CEOs were women. More women were in leadership positions that were running companies. Call it an awakening, whatever you may want to, but I believe that for me, I saw the value specifically when I started meeting more project manager women in this business, and I noticed that they cared more about their projects in some cases than the men.” – Emilio Criado

What You’ll Learn from this Episode:

Connect with Emilio Criado on LinkedIn

Get in touch with Lunacon Construction Group on LinkedIn